Sticking with Windows 7? The forecast calls for pain

For small businesses and consumers without enterprise deployment tools, a clean install of the aging Windows 7 can take a full day. And the problem's getting worse. Here's why.


On Monday morning, I began installing Windows 7 Pro on a clean virtual machine.

On Tuesday morning, more than 24 hours later, the installation was still not finished.

That, in a nutshell, is the unpleasant reality that consumers and small businesses face in sticking with Windows 7 as it counts down to the end of support, 1398 days from today.

The biggest problem, of course, is that Microsoft released Windows 7 Service Pack 1 on February 22, 2011, more than five years ago. Despite occasional rumors and hopes, Microsoft has never released a Service Pack 2 or even a post-SP1 update rollup. Which means that if you try to do a clean install, as I did on Monday, this is what you see when you run Windows Update. 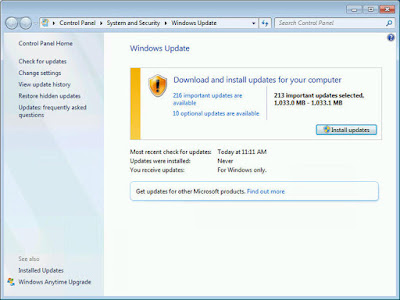 Yes, 216 Important updates are available, and you'd have to be crazy to connect to the Internet without installing those patches first.

But that's not the worst of it.

Just getting to that screen took more than eight hours, thanks to a bug that was documented last fall in Microsoft Knowledge Base article 3102810: Installing and searching for updates is slow and high CPU usage occurs in Windows 7 and Windows Server 2008 R2.

"Slow" does not even begin to describe the glacial pace at which Windows 7 works before even displaying the list of available updates.

Even then you have many hours of work ahead of you. When I started over, using that workaround, it still took nearly three and a half hours from the time I started the clean install until those 216 important updates were finished downloading and installing.

In all, I spent about eight hours to finish installing Windows 7 and something like 300 Important and Optional updates (I lost count, honestly). And each restart along the way demanded my manual intervention.

If I had to point to one feature in Windows 10 that makes it a slam-dunk upgrade over Windows 7, this is it. Updates are cumulative, which means that after a clean install you have to snag only one update (plus a handful of odds and ends, like the latest update for Adobe Flash). Not 216. Or 47. Or even 16

And you can reset a Windows 10 PC--keeping your data files while rebuilding the operating system in place with the latest version, followed by a single update.

...
And it's not going to get any easier between now and January 14, 2020, when the extended support phase finally ends. I wouldn't be surprised if the update count is up over 350 by then, with a clean install taking days.

Good luck with that.

Posted by Curtis at 3:25 PM No comments: