Security researchers say exploiting the vulnerability requires little technical expertise, and can result in a hacker taking full control of an affected PC.

A vulnerability in Intel chips that went undiscovered for almost a decade allows hackers to remotely gain full control over affected Windows PCs without needing a password.

The "critical"-rated bug, disclosed by Intel last week, lies in a feature of Intel's Active Management Technology (more commonly known as just AMT), which allows IT administrators to remotely carry out maintenance and other tasks on entire fleets of computers as if they were there in person, like software updates and wiping hard drives. AMT also allows the administrator to remotely control the computer's keyboard and mouse, even if the PC is powered off.

To make life easier, AMT was also made available through the web browser -- accessible even when the remote PC is asleep -- that's protected by a password set by the admin.

The problem is that a hacker can enter a blank password and still get into the web console, according to independent technical rundowns of the flaw by two security research labs.

Systems -- including desktops, laptops, and servers -- dating back as early as 2010 and 2011 and running firmware 6.0 and later are affected by the flaw.

But Embedi warned that any affected internet-facing device with open ports 16992 and 16993 are at risk. "Access to ports 16992/16993 are the only requirement to perform a successful attack," said the Embedi researchers.

Since the disclosure, monitors have seen a spike in probing activity on the two affected ports. 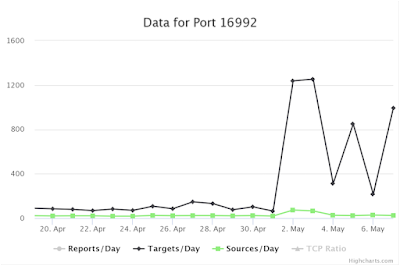 The chipmaker has also published a discovery tool to determine if machines are affected.

Atlassian today announced that it has acquired project management service Trello for $425 million. The vast majority of the transaction is in cash ($360 million), with the remainder being paid out in restricted shares and options. The acquisition is expected to close before March 31, 2017.

This marks Atlassian’s 18th acquisition and, as Atlassian president Jay Simons noted when I talked to him last week, also it largest. Just like with many of Atlassian’s other acquisitions, the company plans to keep both the Trello service and brand alive and current users shouldn’t see any immediate changes.

Trello launched in the TechCrunch Disrupt Battlefield in 2011 and in 2014, it was spun out of Fog Creek Software as a stand-alone company. With Trello, Atlassian is acquiring one of the fastest growing project management services. It now has about 19 million users and just under 100 employees, all of which will join Atlassian.